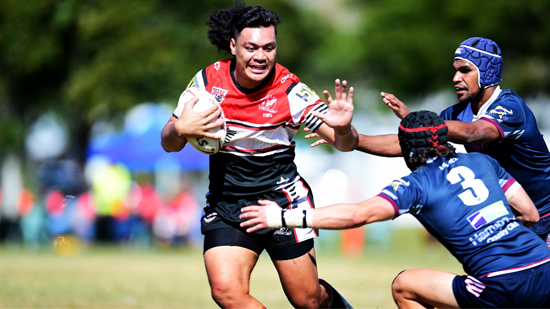 The reigning National Champions jumped out to an early 12–0 lead with tries to fullback Ragarive Wavik and prop Abai Chatfield-Mooka, who both barged over from close range.

After weathering the storm, Palm Beach Currumbin got back into the contest with a try to second rower Brock Priestley, who scooped up a Ryan Rivett grubber to score.

10 minutes later, Chatfield-Mooka thought he had his second try of the game but was denied after the referee ruled a forward pass in the lead up.

Palm Beach Currumbin capitalised on the opportunity and went downfield to score their second on the stroke of half time, with Priestley crossing after being put through a gap by Rivett.

Halfback Tom Weaver missed the conversion and Kirwan took a 12–10 lead into the break.

The second half got off to the worst start possible for Palm Beach Currumbin, with their kick off going out on the full.

Five minutes later, Nanai bagged his second when he latched onto a Harley Taylor kick to extend the Bears’ lead to 12.

A penalty goal shortly after pushed Kirwan’s lead to 14.

With under 10 minutes to play Palm Beach Currumbin needed three tries to snatch victory from the home side.

Their comeback attempt started in the 53rd minute when hooker Oskar Bryant dummied and darted over from dummy half to cut the deficit to eight.

With all the momentum at their backs, they crossed not long after to get within four when Weaver sliced through the Kirwan defence to score.

That left 45 seconds for the Reds to go 100 metres to tie the game. They spread it wide to winger Troy Duckett off the kickoff but he was taken into touch as the siren sounded.

Kirwan props Abai Chatfield-Mooka and Cruz Smith were named joint Man of the Match winners for their strong performances.